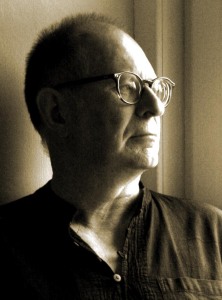 I began writing when I left school, but for a long time found it difficult to write well – most of my stories were total rubbish! In fact, it wasn’t until I started a degree course in Drama that I began to understand why some stories worked and others didn’t. At university I wrote stage plays, but in the summer of 2013 I settled down to write my first novel (The Devil’s Porridge Gang).

So why did you start writing children’s books? (I hear you ask).
Well, it all started with The Hardy Boys:

When I was growing up, our local library was barely two hundred yards from our house, so it made sense in those pre-Amazon days, to read the books they had. Within a few years I’d read all the adventure/space/thriller/detective-themed stories the children’s section of the library had to offer, but the shelf I kept going back to was the one with all The Hardy Boys books.

My heroes Frank Hardy and his younger brother Joe were considerably older than I was, but I looked up to them – they were exciting, good-looking and they always caught the bad guys. With titles like ‘The Disappearing Floor’, ‘The Twisted Claw’ and ‘The Clue of the Screeching Owl’, I was in literary heaven! And all those great stories were written by one man. Or rather, they weren’t.

Many years later, I discovered that the author I knew as Franklin W. Dixon didn’t actually exist. In fact, FWD was the pen name of several writers who wrote under the direction of one Edward Stratemeyer. He was the brains behind the basic storylines, while his crew (known as the Stratemeyer Syndicate) authored most of the original books from 1927 onwards.

By the time I discovered The Hardy Boys in the late Sixties, the Syndicate had started re-writing the stories, changing some of the plots and, in a few cases, only the title remained of the original version. Of the 58 Hardy Boys novels produced, I don’t recall how many I actually read, but it seemed like I was immersed in their world for years on end.

That desire for adventure, the lack of restraint that children often have (haring off after the villains with no thought for their own safety), and placing young people, rather than adults, in the midst of the action to bring down the baddies, that’s what fired my imagination and that’s why, when I created a bunch of heroes of my own, they were kids.

Elementary Penguins
A Dad trying to cope with the loss of his Partner and becoming a single parent.

Happiness Between Tails by da-AL

On The Shelf Books

A bookblog for readers