‘Monster Max and the Bobble Hat of Forgetting’ by Robin Bennett 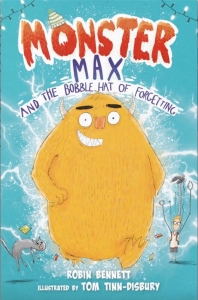 NB This post first appeared as part of a Blog Tour via Rachel at Rachel’s Rare Resources.

Max is no ordinary boy – he doesn’t live in an ordinary house and doesn’t have ordinary parents. But being able to burp and turn into a monster with massive teeth, leap over buildings, and eat anything in his path (dustbins included), is only part of his monstering antics. However, while his mantra to ‘protect and do good stuff’ keeps Max busy, he has also made an enemy – another boy, Peregrine, is hot on Max’s monster trail and with his invention, the POOP machine, plans to capture Max’s monster and put a stop to all the damage that’s going on in the neighbourhood. Trouble is, Max isn’t the one causing the damage…

This is the first in a series of comedy adventures aimed at readers in the 7-9-year-old range. Packed with silly jokes and slapstick situations, it’s a fun read that had me giggling all the way through. With a cast of strange and wonderful characters (including Frankenstein the cat and Madame Pinky-Ponky), it’s a clever and witty read. It also promotes well-balanced relationships and good old family values – even allowing for Max’s particular talents in the monster department, he emerges as a well-rounded lad with supportive (though odd) parents, who give good advice and help their son to win the day.

With delightful illustrations by Tom Tinn-Disbury, this is the sort of book that keeps young readers entertained and laughing, while engaging them in a magical and highly imaginative world that is likely to leave them wanting more.

Aged 21 Robin was all set to become a cavalry officer; aged 21 and a half, he found himself working as an assistant gravedigger in south London wondering where it all went wrong. Robin has gone on to start and run over a dozen successful businesses from dog- sitting to cigars, tuition to translation. The list is quite exhausting. Robin is married with three young children. He spends his time between Pau in the Pyrenées and Henley-on- Thames.

Monster Max and the Bobble Hat of Forgetting is Robin’s first book with Firefly Press publishing in February 2021. He has also written other books for children, published with Monster Books.

A place to share the things that I write

Imagination's journey unfolds one word at a time

Book Reviews from a Reader for Readers

Misfit thoughts of a lonely soul

My thoughts, stories & ideas in the hopes to provide happiness for everyone.