‘Call of the Wild’ by Jack London 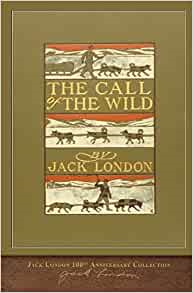 Call of the Wild

This classic animal story, thought by many to be Jack London’s greatest work, tells how happy family dog Buck is kidnapped and whisked off to Alaska to work as a sled dog. Here he meets a variety of humans, and other dogs, including venomous husky Spitz, who immediately takes against Buck.

It’s been years since I had a copy of this on my bookshelves, and thinking it was high time for a re-read, I was thrilled to find that Sea Wolf Press have produced a lovely paperback edition with facsimile copies of the original illustrations and cover. The typefaces are also contemporary versions to those used in the first edition, in this case, Bembo and Century. The book includes many of the illustrations by the original artists, Philip R. Goodwin and Charles Livingston Bull, which help bring the story to life.

First published in 1903, London’s writing style is unusual, especially for the time it was written, and takes the form of a ‘hero’ journey, transforming Buck through a series of harsh and threatening adventures until he finds the true calling of the wild. Though aimed at children, some of the language is tricky and might prove difficult. However, it’s well worth the effort as this is a thoroughly good read and has a quality to it that most books about animals never get anywhere near.

A little bit of everything

BOOKS FROM DUSK TILL DAWN

Each night I TRAVEL THE WORLD, I LIVE IN THE MIND OF KILLERS AND WALK AT THE SIDE OF HEROES

Willing Yourself To Win

The Musings of a Writer / Freelance Editor in Training