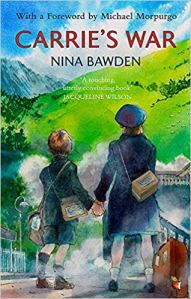 Visiting the wartime village where she and her younger brother were billeted following the evacuation from London, a grown-up Carrie Willow tells her own children of her adventures. But her memories of the Welsh hills, the surly Mr Evans and his timid sister are marred by something she did following one of her many visits to Druid’s Bottom, where the sickly Mrs Gotobed lived with her housekeeper Hepzibah, the odd Mr Johnny and another evacuee, Albert.

I had vague memories of having read this years ago but must have imagined it, as the book was entirely new to me. I read it in one sitting and loved the atmosphere, the strange mix of characters and the slightly sinister plot line that bubbles away on the backburner throughout the book. Nina Bawden’s characters, particularly the mysterious Hepzibah and the bullying Mr Evans, are beautifully drawn, entirely realistic and, ultimately, thoroughly endearing. The ending had me on the edge of my seat and left me in tears, (which doesn’t happen often).

An absolute delight from start to finish.

Exploring the fault lines of the multiverse.

This is where the cool kids find their pulp, crime, and mystery book reviews.

Just the thoughts and ramblings of another book addict. 📖

A book a day is bliss😍

For the reader in you